Why Aren’t We Talking about the People’s Budget?

This week has been a rough week for the global economy. The stock market fell dramatically. S&P downgraded the U.S.’s credit rating from AAA, its highest rating, to AA+ for the first time in history. The Eurozone continues to be in trouble with Spain and Greece possibly needing a bailout. In addition, London, and other parts of Great Britain, experienced days of violent riots, fueled by grievances over police racism, austerity, inequality, and the growing economic suffering of Britain’s poor and working masses. Certainly not a good week. END_OF_DOCUMENT_TOKEN_TO_BE_REPLACED

Posted by Adam Hudson on August 13, 2011 in Capitalism, Economy

Why Obama’s Debt Deal is Bad 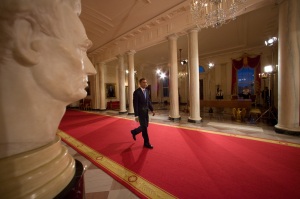 ceiling limit to avoid default, the U.S. Congress passed a debt deal that President Barack Obama signed into law on Tuesday. The deal passed the House 269 to 161 and the Senate 74 to 26.

For weeks, politicians and the media said that the United States was in a massive debt crisis. The narrative started from Republican politicians and became accepted as dogma by the Democrats, particularly Barack Obama. Republicans claimed that the budget deficit was the most urgent problem to deal with. The cause for this deficit was too much government spending. END_OF_DOCUMENT_TOKEN_TO_BE_REPLACED