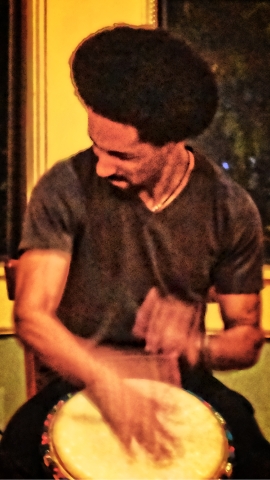 Adam Hudson is a journalist, writer, musician, Pan-Africanist, and co-host of the podcast Real Sankara Hours. He holds a BA in International Relations from Stanford University (class of 2010) and an MFA in Nonfiction Writing from University of San Francisco (class of 2019). He was born in Oakland, California and raised in Pittsburg/Bay Point, California, a multiethnic working-class suburb in the East Bay Area.

As a journalist, Adam typically covers war and peace issues, Guantanamo, housing/gentrification, and policing/incarceration. His work has appeared in teleSUR English, Al-Akbhar English, AlterNet, Truthout, The Nation magazine, where he used to be an intern, and several other publications. In addition, one of his articles is featured in the Truthout/Haymarket anthology Who Do You Serve? Who Do You Protect?: Police Violence and Resistance in the United States. Adam also spent two weeks in Guantanamo Bay, Cuba covering military commissions and related issues for Truthout. He’s given political commentary and analysis on radio stations, such as 99.5 FM WBAI in New York City, 94.1 FM in Berkeley, California, and 900 AM WURD in Philadelphia, Pennsylvania.

For his journalism, Adam was awarded “Champion of International News” for Black Media Appreciation Night 2014, which honors the best in Bay Area independent black media, and received a Certificate of Honor from the City/County of San Francisco Board of Supervisors.

In addition to journalism, Adam is also a dedicated musician. For six years, he played drums for the now-disbanded alternative rock band Sunata. As a solo artist, he plays the djembe and fuses traditional African rhythms in a modern African-American context as a way to show pride in his diasporic African heritage. He has played numerous shows and open mics throughout Northern California both in his band and as a soloist.

5 responses to “About Adam”