Forty years ago, on April 3, 1969, more than 800 people met in Stanford University’s Dinkelspiel Auditorium to form what became known as the April Third Movement (A3M). This movement called upon Stanford and the Stanford Research Institute, which was owned by the university, to halt chemical and biological warfare research, classified research and other programs related to the Vietnam War. The April Third Movement was more than just an activist movement that took place at Stanford. It was part of a national youth movement that mobilized against America’s colonial and atrocious war in Southeast Asia. This movement occurred on university campuses across America, in which students organized sit-ins, teach-ins and rallies, printed flyers and occupied buildings to express moral outrage against and put an end to the war in Vietnam. Through their hard work and passionate organizing, Stanford students were successful in eliminating classified research at Stanford and contributed to the popular movement that ended the Vietnam War.

Forty years later, the United States, controlled by the Bush administration, engages in an aggressive war against Iraq, a country that posed no threat to the United States. The invasion was illegal from the very beginning but that did not stop the Bush administration from manipulating public opinion to support an immoral and illegal war. In Fall of 2007, the Hoover Institution, a neoconservative think-tank at Stanford, gave Donald Rumsfeld, one of the leading architects of the war in Iraq, a one-year appointment as a “distinguished visiting fellow”. In response, a petition was sent out opposing the appointment and garnered over 4,000 signatures. In addition, the group that soon became Stanford Says No to War, put on a rally protesting the appointment. This rally managed to get covered by international press sources and drew about 100 attendees. While an ASSU bill opposing the appointment failed to pass by 2 votes, Donald Rumsfeld’s appointment was never renewed and there is no evidence that Rumsfeld ever set foot on campus. There is no doubt in my mind that the grassroots outrage that occurred deterred Rumsfeld from stepping on Stanford soil.

However, the struggle for peace and justice continues. Faculty member, Hoover Institution fellow and former Provost Condoleezza Rice has returned to Stanford University after serving in the Bush administration as National Security Advisor and Secretary of State. During her time in the Bush administration, Rice played a decisive role in authorizing the use of torture when she chaired then National Security Council’s Principals Committee. In addition, she played a key role in manipulating public opinion to support the invasion of Iraq by spreading misinformation about the threat the country posed to American national security. As we all know now, Iraq had no weapons of mass destruction nor any connections to 9/11 or al-Qaeda. Unfortunately, this war has cost the lives of nearly 5,000 Americans and a million Iraqis. Torture is a crime against humanity and war of aggression is the supreme international war crime. There is a strong case to be made that Condoleezza Rice is responsible for committing both egregious crimes. Therefore, Rice needs to be investigated and, if necessary, prosecuted by the appropriate legal authorities – not honored with prestigious titles at an elite university. This is what our movement is about and you can join by signing our petition. 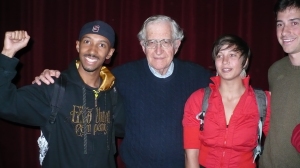 By holding her, and other high government officials, accountable for these atrocities, we can prevent them from happening in the future and work toward building a peaceful world in which war and torture are things of the past. At the same time, fighting for peace goes beyond just holding government officials accountable for their actions. It also means being critical of the current administration and confronting the imperial system head on to end the destruction it imposes on the world. Such a struggle requires a massive movement from the grassroots and the campus movement to hold Condoleezza Rice accountable for war crimes is part of that struggle.

UPDATE (10/5/2009): Here’s the Stanford Daily’s coverage of the event. Considering their usual coverage of activist events, this article was a surprisingly good summary of what went on. Also, check out Stanford Says No to War’s YouTube channel for video clips and Danny Colligan’s pictures.