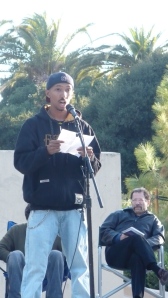 Forty years ago, on April 3, 1969, more than 800 people met in Stanford University’s Dinkelspiel Auditorium to form what became known as the April Third Movement (A3M). This movement called upon Stanford and the Stanford Research Institute, which was owned by the university, to halt chemical and biological warfare research, classified research and other programs related to the Vietnam War. The April Third Movement was more than just an activist movement that took place at Stanford. It was part of a national youth movement that mobilized against America’s colonial and atrocious war in Southeast Asia. This movement occurred on university campuses across America, in which students organized sit-ins, teach-ins and rallies, printed flyers and occupied buildings to express moral outrage against and put an end to the war in Vietnam. Through their hard work and passionate organizing, Stanford students were successful in eliminating classified research at Stanford and contributed to the popular movement that ended the Vietnam War. END_OF_DOCUMENT_TOKEN_TO_BE_REPLACED